In an effort to keep our Connection readers updated on the policy efforts that affect our sciences, we are re-posting this blog post from Social Science Space below. For more frequent updates on federal research funding, check back with the Social Science Space blog or follow @socscispace on Twitter. 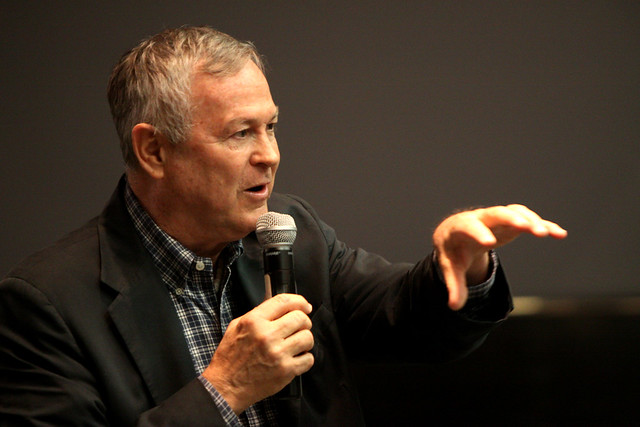 The funding seesaw for that corner of the federal government that pays for a majority of university-based social science in the United States swung lower on Wednesday afternoon.

The swing occurred as the full House Science Committee marked up the Frontiers in Innovation, Research, Science, and Technology Act of 2014, which re-authorizes federal funding for the National Science Foundation for the current fiscal year and next. Dana Rohrabacher, a Republican congressman from California, introduced an amendment that would cut funding for the NSF’s Directorate of Social, Behavioral and Economic Sciences (SBE) from $200 million to $150 million, a particularly dramatic cut since FIRST already trims $56 million from the directorate’s enacted budget for the current fiscal year.

This is not the only bill being considered by the House of Representatives that considers funding for the NSF. An appropriations bill that covers the commerce, justice and science agencies in the federal bureaucracy is also moving forward, and that bill would allocate $7.4 billion– $200 million more than FIRST–to the National Science Foundation next fiscal year. (FIRST is an authorization bill, not an appropriation bill. One popular analogy of the two-step authorization/appropriations process is that authorization is telling your children they can go to the movies, while appropriations is giving them the money to do so.)

All told, the combined cuts in FIRST reflect a 44 percent reduction in the SBE budget. The amendment passed on a voice vote, with the chairman of the committee, Texas’ Lamar Smith noting that he supported the cut, but a full and authoritative roll call vote on the cut was postponed with no future date announced.

“We must be smarter about how we spend,” Rorhabacher told his colleagues just before offering a litany of SBE grants for projects — $350,000 to see if playing Farmville on Facebook helps adults develop relationships or $581,000 on whether online dating site users are racist or not – that he implied were not worthy of federal funding.

“Maybe these are things we might want to do if we had a surplus,” he added, but for now he called for “restraint.”

Democrats on the committee quickly swarmed to defend the directorate, noting its existing haircut and arguing that scientists, not politicians, were in a better position to decide what had scientific merit and what didn’t.

“Your staff did a great job of researching some of these anecdotes, and they sound like very wasteful little programs,” acknowledged New York’s Dan Maffei, “and who knows what they really were, and I’d love to know more about them. But the solution isn’t to cut entire directorates, the solution isn’t to cut behavioral science out completely.”  He then pointed out “silly” basic research in the physical sciences, such as in theoretical physics or Michael Faraday “playing with magnets” that underpinned much of modern technology.

“We have to have some confidence in the scientific community.”

Chairman Smith, countered that FIRST increased money for physical sciences. Furthermore, “I don’t consider the $150 million for this SBE to be pocket change.”

But as Illinois Democrat Dan Lipinski argued, in a federal budget sense, or even an NSF budget sense, it is. SBE in this bill represents only 2.7 percent of the total budget in the FIRST bill (and is 3.5 percent of the traditional NSF budget). If silly projects are a problem, he suggested, other language in the bill should be used to combat that, not cutting the directorate’s budget in half. Lipinski had argued up the SBE budget to $200 million from $150 when it appeared before a Science subcommittee for its debut markup in mid-March. That early amendment passed the subcommittee on a unanimous vote.

That the bill actually set specific funding levels for the directorates within NSF also came under fire from Democrats on the panel, including California’s Zoe Lofgren, who introduced an amendment to remove “ill-advised” directorate level recommendations. The micro-management, as opponents would have it, has been criticized by a number of academic organizations, including the NSF’s own overseers, the National Science Board.

Larry Bucshon, an Indiana Republican and co-sponsor of FIRST, had earlier lauded the greater level of control as helping focus the NSF on research with a clear economic payoff, and noted that as recently as 1998 directorate-level spending had been included in an NSF authorization bill. “Science was not ruined … scientific improvement was not impeded by Congress,” he argued.

Eddie Bernice Johnson, the ranking Democrat on the Science panel, was prepared for the argument that Congress has set spending for research directorates before. “They’re right,” she said of the GOP’s history lesson. “But the last time it was done was in 1998. This committee stopped doing it for a reason. NSF is a bottoms-up agency in the sense that it responds to scientific developments in near real time and funds the best ideas regardless what area of science they come from.”

She added, “The majority included it in their bill so they could pick and choose the science they believe in in, and that they believe is important, rather than allowing the experts to make these decisions.”

Nonetheless, Lofgren’s amendment appeared to fail, pending a roll call vote. The appropriations bill, in its current form, does not include directorate-level language.

Several times Democrats offered several amendments to FIRST that increased its overall authorized funding–Johnson even re-introduced a Democratic alternative to FIRST — but all appeared to fail on party-line voice votes that will likely be confirmed by requested roll-call votes.

Lipinski, for example, introduced an amendment that would have set FIRST’s authorization for the NSF to the same level as the appropriations bill. Lipinski said he found it difficult to sit on the Science Committee and see it allocate less to a science agency than what the Appropriations Committee–presumably a panel with sharper pencils–could accept for the NSF. He noted that the competing bill already included $400 million in cuts across the commerce, justice and science agencies to accommodate the increase; “They have made the decision that NSF is worth spending this money on under a [spending] cap.”

Nonetheless, the majority Republicans shot down the increase, arguing that fiscal rectitude in the face of a $17 trillion national debt forced their hand.

One of the hearings more surreal moments occurred when Democrat Donna Edwards of Maryland asked how FIRST, if passed, would handle significant cuts to the SBE directorate and smaller cuts to the geoscience directorate given that the current fiscal year is already two thirds over.  Smith answered that when FIRST reaches the House floor, legislators will be able to amend the amounts to and to make them jibe with whatever the appropriations bill calls for. While that would be the case for the next fiscal year, the chairman, and later his staffer Richard Yamata, seemed not to understand the gist of Edwards’ query—that FIRST authorizes—or doesn’t—spending for the fiscal year ending in September that was legally approved last year and which has almost certainly already occurred.

An incredulous Edwards asked, “So we’re going to do a bill that is going to set spending limits lower than the spending limits that the Appropriations Committee has already set that are already signed into law. I don’t understand it. I don’t think this is unsustainable.”

Upset about these possible funding cuts? So are we! Oppose the FIRST Act and protect NSF’s support for social science research by sending a letter to congress here.